Snapshot of a Career

A couple of weeks ago, I had the good fortune of receiving three performances of my music in the span of two days. The pieces and performance venues were amazingly diverse: a quirky chamber piece performed at a hipster club in downtown Atlanta; a large symphonic wind ensemble premiere given in the outer suburbs; and a saxophone quartet performed in Trento, Italy. This may not seem like a big deal to many. However, unless a contemporary classical composer is of a certain prominent standing within the profession, receiving so many performances in a 48 hour period is somewhat of an anomaly. This occurrence was special enough, in fact, that the conductor of the wind ensemble premiere quipped in a recent Facebook post, “You had a huge weekend - composers don't often get three performances of their works in a month, let alone over a weekend!”

I have spoken in the past of the “feast or famine” nature of a professional composition career within the confines of this blog. The two-day flurry of performances certainly qualifies as period of feasting. However, in thinking over the events of that weekend, I find that those 48 hours were also a fairly good snapshot of my career to date. To be sure, the weekend was not indicative of the frequency that my music is performed on a regular basis. Rather, it was instructive as a model of how at least one composer goes about getting his work heard over the long haul.

The first thing I noticed, as noted above, was the sheer diversity of performance venues and types of compositions performed over that weekend. The programmed works included a large ensemble, small ensembles, a piece with an unconventional instrumentation, pieces with standard instrumentation, and performances taking place at local venues and an international venue. This variety suggests a broad portfolio of works and a willingness to seek out as many performance opportunities as possible. 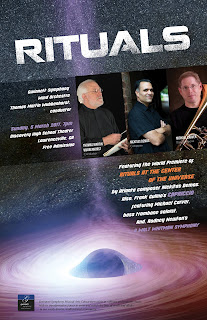 The next thing that caught my attention was exactly how the pieces came to be programmed. Out of the three performances, two of them were made possible due to my friendship with the performers. The third performance was the result of my submission to an online score call. While it might be tempting to infer that I should expect roughly full third of my performances to result from submissions to outside opportunities, this is simply not the case. At best, I usually am successful in these types of submissions somewhere around 10% of the time. The more instructive lesson here is that the majority of my performances during that weekend were the result of personal relationships. I am certainly not the first composer to notice this and am a member of a large chorus singing the praises of composing for one’s friends. Developing good relationships and writing for friends is often the composer’s best way to get music performed. Sometimes - especially if performers feel that the process was collaborative between themselves and a composer - musicians will do far more than simply perform a piece. They might even champion a work, give it many repeat performances, and actually commission new compositions.

While writing for friends is extremely important, I still often submit compositions to outside score calls and similar opportunities. I just temper my expectations. I recognize that the majority of my success will not be a result of applying to every opportunity for which I am eligible. Nevertheless, a certain percentage of performances do come out of this kind of activity. Submitting work to outside score calls is not just a way of expanding performance opportunities. If successful, these submissions may lead to the formation of new personal relationships. These relationships then naturally lead into more chances to compose new works and receive performances. This is exactly the case with one performance of my music from the weekend under review. I was very fortunate that my saxophone quartet Wandering Into Myth was accepted for performance at an international festival during that weekend of concerts. As a result of this acceptance, I learned that one of the performers has become interested in a solo saxophone piece of mine and may now give more performances and make a studio recording of that composition. As a side note, this performer was able to discover my additional music for saxophone by simply visiting my website. This is another instance where having a robust web presence has helped my career.

Another activity associated with my extraordinary weekend involved me simply showing up. Again, this sounds like a small thing, but it is really important for composers to make the effort to attend performances - especially of their own music. While at the Saturday performance of my chamber piece, So Small Against The Stars given by the new music ensemble Chamber Cartel, I had an opportunity to meet the performers of another new music group also featured on the concert: the Unheard-of//Ensemble based out of New York. In striking up a conversation with the performers of the New York group, it turns out that I may have an opportunity to collaborate with them and compose a new piece to be premiered next year. At the Sunday concert featuring the premiere of my work for symphonic band, Rituals at the Center of the Universe given by the Gwinnett Symphony Wind Orchestra, I had an opportunity to meet with two conductors attending the concert. As a result of conversations at a post-concert dinner, there might be opportunities for me to compose new works or have existing compositions for symphonic winds and symphony orchestra performed in the near future. Showing up and making connections can never be underestimated. Even if a composer doesn’t have a piece on a particular concert and there are no immediate projects emanating from these kinds of encounters, the seeds are nevertheless planted for future collaborations.

Finally, my rewarding weekend wasn’t all roses and applause. Rejection letters also found their way into my email inbox during those 48 hours. It’s astonishing how quickly - even in the midst of a great run - these kinds of letters bring me crashing back to reality. No matter how much success one experiences, the hard truth is there will always be more rejections than successes and no matter how small they are, they will all hurt and make a composer feel worthless. I actually spent time after reading the rejections in between concerts of my music feeling like my career was in the toilet and that I was a failure. I had to pull myself out of my self-pity and look at the big picture. This turns out to be good advice for a career in general. When rejection comes - as it always does, often in great big batches hard to endure - it’s important to take stock, dwell on what successes have been earned and - most importantly - get back to work.

I really appreciated the amazing recent spate of concerts featuring my music and remain very grateful to those who performed and premiered my music. However, an additional gift of the extraordinary 48 hours, was how those performances revealed my career in microcosm. The weekend afforded me the opportunity to stand back, consider a larger picture, and put my work as a creative artist into perspective. Now that the elation of all those concerts has abated, I am challenged to work even harder so that such weekends become less of an anomaly and more the norm.