A Tale of Two Cities

I have a somewhat complicated relationship with Atlanta. While I consider myself a native, I was not actually born in this city. I arrived in Boulder, Colorado while my father was completing his Masters degree in Music Education at the University of Colorado. After my birth, my family lived all of six months more in Boulder before heading back to my father’s hometown of Atlanta. I therefore have no memory of my western birthplace. Growing up, Atlanta and the Deep South were all I knew. When I left Georgia to continue my education, I never in a thousand years thought I would ever make it back down to the South much less get back to Atlanta. Yet, that is exactly what happened. 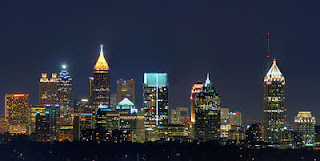 Even after I first arrived back, my wife and I thought our stay would be brief. But an adjunct position at the Georgia State University School of Music turned into a full-time Visiting Professor position which led me to a full-time tenure-track gig and ultimately to my current position as a full Professor of Composition. Along the way, I did apply for other job opportunities in academia and even came very close to leaving on at least one occasion. However, for better or worse, Atlanta continues to hold me close as a native son, despite my “transplanted” birth, my improbable return after school, and my best efforts to leave.

When I travel, I'm often asked,"What is Atlanta like?" I usually have a couple of glib responses at the ready. First, I say that Atlanta reminds me of a mini-Los Angeles with its urban sprawl, over-development, massive highway system, smog alerts, and horrific traffic. Second, I characterize the identity of the city as a teenager that shows a lot of talent and potential but doesn't really know what it wants to be when it grows up. This is especially true of the contemporary arts to which I am particularly attuned. It seems that my relationship with Atlanta is not the only one that is complicated. Atlanta’s relationship with the contemporary arts is not exactly crystal clear either. In fact, it appears to me that Atlanta seems to have two identities in this area. Two recent events really tell the tale of the two cities that are Atlanta.

First, there is the Atlanta that is beginning to take itself seriously as a center for contemporary classical music. This started when Robert Spano first arrived in town back in 2001 to helm the Atlanta Symphony Orchestra. I'll never forget that one of his first actions after arriving was to set-up a meeting with all the local composers organized by the now sadly defunct Atlanta Chapter of the American Composers Forum. It was a generous gesture and we were all thrilled to learn that Spano was determined to program more contemporary music with the symphony. He has certainly held true to his promise. Over the years, Spano has championed the music of Jennifer Higdon, Michael Gandolfi, Osvaldo Golijov, Christopher Theofanidis, and Adam Schoenberg; going so far as to christen these particular artists part of his "Atlanta School" of composers. Of course, the music of many other living composers - including Alvin Singleton, John Adams and Jonathan Leshnoff - is also heard often in the Woodruff Arts Center. 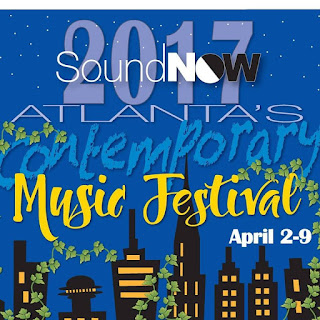 Another sure sign of Atlanta's rising importance as a center for contemporary music is the recently concluded SoundNOW Contemporary Music Festival. It's one thing to put on such a festival once but quite another to do it again with more participating ensembles, concerts and greater press coverage. Such was the case during the first week in April 2017. The Second Annual SoundNOW Festival featured nine ensembles and eight concerts at various venues in the city during the span of a single week. As Doug DeLoach, a writer for the popular Atlanta magazine Creative Loafing, stated in his preview of the festival, "Based on recent experiences at chamber music recitals, the time for this music truly has arrived and its impact is reverberating across generations." I am more than proud to be a co-founder and artistic board member of SoundNOW and in some small way contributing to the field in what I hope is a meaningful way.

Despite these and other bright spots in the contemporary arts, there is, unfortunately, a second Atlanta that is not quite as progressive in its outlook. Falling right in the middle of the SoundNOW Festival came the devastating news that 13 dancers in the Atlanta Ballet were leaving the company. The reason for their departure is very troubling. ArtsATL.com reports that "In a move that dramatically changes the future face of Atlanta Ballet, 13 dancers — almost 50 percent of the company — will not be back for the 2017–18 season.  Multiple sources within the company told ArtsATL that the departures are the culmination of a culture clash between the open and modernistic atmosphere fostered by previous artistic director John McFall that was embraced by the dancers, and the classical ballet ethos favored by Gennadi Nedvigin, the new Bolshoi-trained artistic director." Gone among the star-level dancers is my friend Tara Lee who I had the incredible fortune to collaborate with on a project with the ballet several years ago. So, yeah, this news saddens me on a personal level.

While no one wants to abandon the classics nor is suggesting that Tchaikovsky should no longer be performed by the Atlanta Ballet, I find it deeply disconcerting that an "open and modernistic atmosphere" may be ending at this fine institution. I'm sure that things will be better than canned music and Swan Lake at every performance but it is very regrettable that initiatives like John McFall's "New Choreographic Voices" - an initiative that gave me the opportunity to collaborate with Tara Lee on a new ballet piece - seem to be terminated. I can only hope and pray that this kind of regression will be limited to the Atlanta Ballet and be very short-lived.

If we turn our backs on modern - even experimental - music, visual art, theatre, cinema, and dance, we risk condemning these art forms to dusty museums instead of vibrant living reflections of our 21st Century reality. I understand that this type of art is not everyone's cup of tea and that presenters do have to think about their audiences when programming performances or curating exhibitions. However, we have pop culture to placate us. True Art needs to push us sometimes. Like a good sermon, Art should comfort those who suffer and challenge those who are comfortable.

In early April 2017, two paths were clearly revealed in this city. This is why Atlanta reminds me of a gifted adolescent still stumbling towards full potential. I hope that when this teenager matures, it will embrace a culture that, while cherishing the old, will continue to celebrate the contemporary voices of our time. It is the obligation of every artist in this city - irrespective of discipline - as well as every consumer and patron of artistic expression to ensure this happens. When a culture only looks backward in its art, it ceases to grow.

It's up to all of us to make sure this does not happen on our watch.