During this time of year, those who know me primarily as a college professor often say things like, “Must be nice to have your summers off…” or words to that effect. Some of these comments are made sarcastically and others more wistfully. However, anyone who teaches for a living hears these sorts of comments often and we all share the same eye-rolling response – if only inwardly. Every teacher – from kindergarten to college professor – works untold hours, usually for demeaning wages. This work hardly ceases during the summer. The same can be said for composers. Although I compose throughout the year, it’s during the summer months that I try to double (or in the case of this summer in particular, triple) my creative output.
To be a productive composer, I often tell my students that there needs to be some sort of constant in the writing process. Usually, what I mean by this is that a composer, to work diligently and effectively, must either write daily at the same time or in the same location. Sometimes it is both. For me, that is somewhat the case. I tend to always write in my home studio and usually late in the evenings into the wee hours of the morning. Over the years, I have learned to be flexible and alter the time that I write but not so much the location. There is one notable exception to this location rule I have set for myself. The exception involves leaving Atlanta to write in a very different environment. Since it is usually impossible to take significant time away from a project, composing in a different location for some specific time, serves as a pseudo “vacation” of sorts. A change of physical surroundings also helps stimulate the old creative juices.
Many composers find such changes in locale through residencies in artist colonies. Personally, I find this kind of residency a bit challenging. There are three reasons for this. First, I don’t want to leave my wife and children for a very extended period of time. This was especially the case when the kids were much younger and my wife needed my help. Now my children have reached their teenage years and are a bit more self-sufficient. It now might be possible to entertain a residency at a colony except for the remaining two reasons, the second of which has to do with gigs. I am loath to turn down relatively lucrative gigs with my Greek band due to an extended residency at an artist colony. There are many gigs during the spring and summer months and these are precisely the months I’m not obligated to teach a heavy semester load. Even so – it is very tempting still to just block out a few weeks and take the hit in terms of opportunity cost for the benefit of a change of scenery and time to work exclusively on my writing. However, the third reason I still do not apply for a residency at an artist colony has to do with the fact that I already have access to a colony of sorts. 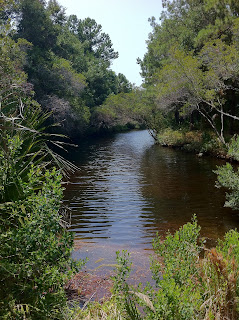 For those of us in the grind of writing everyday – and I’m a firm believer that one should write every day – working away from home in another location for some period of time is very important. Whether one applies for a residency at a beautiful artist colony or can escape to a personal “colony,” as in my case, the benefits of work away from home are significant. The change of scenery reinvigorates the creative process and, perhaps more importantly, provides the “vacation” that everyone needs from time to time. This is all accomplished without sacrificing progress in writing.
After all, no one really gets to “take the summer off…”
Posted by Unknown at 12:02 PM No comments: