“Art isn’t always beautiful.”
I’m paraphrasing here, but these were sentiments expressed by Donald Erb during one of our composition lessons in the early 1990’s. I can’t recall the circumstances that prompted his comment, but I’ve been reminded of my mentor’s words recently, having followed the controversy swirling around an album cover designed for Steve Reich’s WTC 9/11 performed by the Kronos Quartet. Much has been written about the choice to use the stark photo taken by Masatomo Kuriya that captured one tower aflame as a second jet hurtled toward the other. The image is heart breaking and cannot help but stir up deep emotions in those who remember the awful events of September 11, 2001. Nonesuch, the label publishing the recording, has subsequently pulled the album cover. A different image will be used when the album is released on September 20.  For his part, Reich issued the following statement on the Nonesuch website:
“As a composer I want people to listen to my music without something distracting them. The present cover of WTC 9/11 will, for many, act as a distraction from listening and so, with the gracious agreement of Nonesuch, the cover is being changed.
When the cover was being designed, I believed, as did all the staff at Nonesuch and the art director, that a piece of music with documentary material from an event would best be matched with a documentary photograph of that event. I felt that the photo suggested by our art director was very powerful, and Nonesuch backed me up. All of us felt that anyone seeing the cover would feel the same way.
When the cover was released on the Nonesuch site and elsewhere, there was, instead, an outpouring of controversy mostly by people who had never heard the music.” 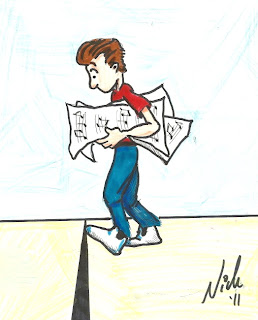 It’s true that Art isn’t always “beautiful.” Sometimes an artist feels compelled to react to very ugly aspects of the human condition from time to time. An artistic response to tragedy, in fact, is essential. Reaction to tragedy through the depiction of images, words or music makes us unique among the creatures of this earth. However, as artists, we do not live in a vacuum. How we react, artistically, is equally important. As members of a community, we must remind ourselves that powerful artistic works offered up for public consideration will affect our neighbors in profound and perhaps even unintended ways.
There has been some cynical talk that Reich and/or Nonesuch cooked up the album cover and its subsequent removal from the CD in order to promote sales of the recording. I have a hard time believing this. After all, Steve Reich is a Pulitzer Prize winning composer whose name is in virtually every textbook on 20th Century music written in the last few decades. The group performing his work, the Kronos Quartet, is one of the most highly respected and successful chamber ensembles of our time. They could have issued a cover that was simply the color blue and sold a healthy number of CDs. I also agree with Anne Midgette who wrote, in her thoughtful August 12 Washington Post column, “I don’t think Reich and Nonesuch advocated the use of this image lightly or unthinkingly.” How could they? For his part, Reich was living in Manhattan on 9/11. I’m betting he experienced the horrors of that day in a more personal way than most of those now taking umbrage at his use of the photo. 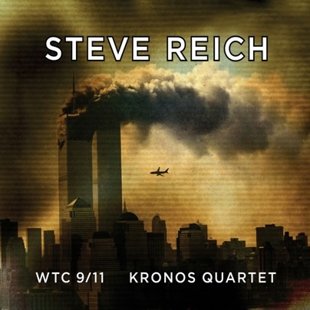 Part of me also wants to defend the choice of the cover art precisely because of its unflinching nature. What happened on 9/11 was brutal and shocking. Sometimes I think it shouldn’t be sanitized by the removal of all documentation of the events that transpired that day. Again referring to her column, Ann Midgette expresses a similar concern, writing “…in the well-meaning wish to guard everyone’s feelings, we risk losing sight of the inherent transformative process of a work of art.”
However, I am ultimately glad the decision to replace the cover art was made. For me, it’s not so much a question of the “big picture” (i.e., the role of Art in society). I’m glad the decision was made because I believe that remembering the events of 9/11 need not push us, as a society, to abandon our compassion. It’s only been ten years. That’s not a long time. Almost everyone who witnessed the attacks around the world (and especially in the United States) can still tell you precisely where they were and exactly what they were doing when they first heard and saw the news. If someone like me, a relatively unknown composer living 850 miles away from Manhattan, can remember each minute detail of that day – how much more do the families of those who lost loved ones remember? I believe they not only recall each and every agonizing second but remember as well, each and every beautiful face that was taken away. I’m glad the decision to remove the cover art was made because it is the compassionate thing to do for those still suffering in ways that defy my comprehension.
Yes, artists need to be free to deal with large events like 9/11 as they see fit. Yes, audiences must understand that an artist is sometimes not working primarily to simply entertain them. And yes…Art is not always beautiful because what it deals with sometimes is certainly not beautiful. Yet if, as artists, we ask our audience to journey with us as we explore the dark crevices of our humanity, let us respect the fact that this can be, at times, a painful journey.
Perhaps in the future, we will be ready for a piece of music with documentary material from 9/11 that is matched with a documentary photograph of those events.
But not today.
Posted by Unknown at 12:56 AM